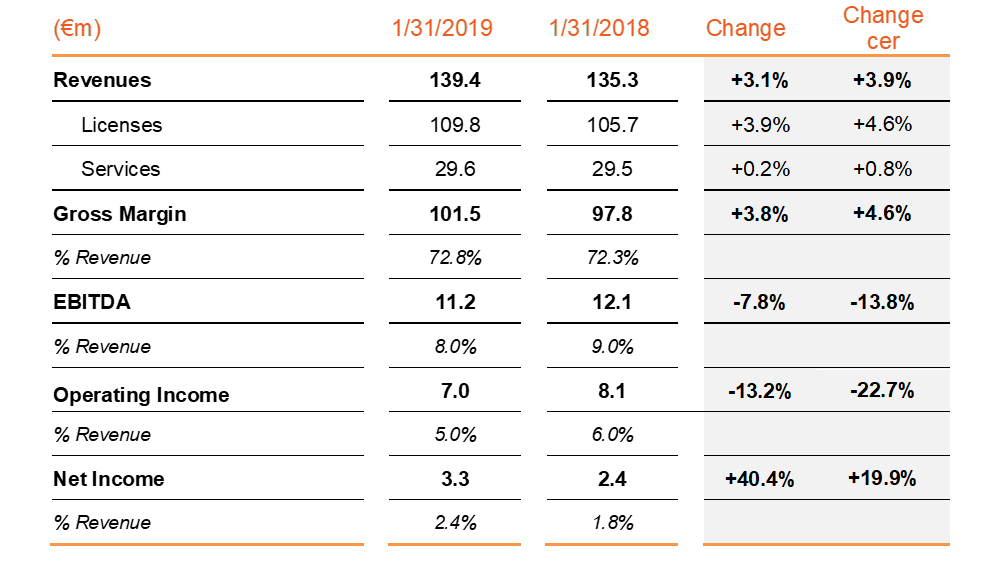 The progress in sales confirms the concrete results of a business development focused on key accounts and the launching of strategic initiatives such as in light weight engineering and immersive human centric engineering. Building on a strongly established and growing solid installed base, this promises a significant growth potential for the Group.

Notably, the twenty largest global customers account for 45% of total order intake. This roster includes some of our strategic partners and the world’s industrial leaders (particularly in the Automotive, Aeronautics and Energy sectors), which are well along in the digital transformation of their business models. ESI’s business average growth with these customers is double-digit growth rates and as much as twice the PLM market average. These leaders of the Industry 4.0 and Smart Factory have enthusiastically welcomed ESI Group’s physics based Virtual Prototyping solutions and their further development perspective of performance in-service.

In the context of the moderate average growth over the period, the current transformation and increased long-term investments weigh, as anticipated, on the Group's results and profitability for the 2018 year. Individually, the Group’s core business shows a good level of profitability, while the innovation activity, that contributes to positioning the Group for the future, carries by construction lower profitability in the early years.

Improvement of the gross margin

The operational optimization associated with the Group’s transformation has differing impacts on two main expense items. In 2018, the Group increased:

As part of its financing policy, the Group secured a €40 million syndicated credit line from a consortium of leading European banks, replacing the 2015 agreement.

Implementing a plan to achieve operational excellence and strategic focus

The unique opportunity offered by the new Industrial Transformation

By launching at the right time its own in depth technological and organizational transformation, ESI Group has kept pace with the evolution of its industrial lead customers (Industry 4.0 and Smart Factory) and anticipated their future needs. By systematically integrating cutting-edge technologies (Internet of Things, Big Data, Artificial Intelligence, additive manufacturing etc.) into solutions that draw on its unique expertise in physics of materials, ESI Group has articulated a new global approach centered on industrial productivity and the performance of products beyond their initial development to their entire lifecycle (Product Performance Lifecycle™). The Group’s vision of: “zero real tests, zero real prototypes, and zero unscheduled production shutdowns”,  fully addresses the short- and medium-term objectives of global industrial leaders.

This approach is gaining traction with the Group’s strategic customers and is already bearing fruit in the form of tangible commercial successes. For example:

Aware of the potential offered, but also of the initiatives to be implemented to achieve its objectives, the Group is launching an ambitious short- and medium-term action plan based on two fundamental perspectives:

2. Focus on increasing commercial efficiency and maximizing the ROI on innovation to:

Cristel de Rouvray, Chief Executive Officer of ESI Group, concludes: “The year 2018 was marked by a return to growth in consolidated revenues and a confirmation of the strength and dynamism of our installed base. This performance must be understood in terms of the differentiated advancement of enterprises with regard to the digital transformation of their business model and tools. The latest sales success stories among several of our key accounts reinforce our belief in our vision and its proper execution. By maximizing our operational performance and focusing better on our business strategy, we are confident that we will be able to improve our overall rate of growth and level of profitability. The full commitment shown by our teams to making this plan a success gives us all great confidence that we will achieve our goals.”