Alain de Rouvray, ESI Group’s Chairman and CEO, comments: "The sustained growth recorded over the first quarter of 2016 confirms the Group’s commercial momentum. That impetus has been boosted by our recent acquisitions in the field of systems modelling, big data and machine learning, which dramatically increase the perceived value of our Virtual Prototyping offer. The continuing very high rate of repeat Licensing business and the solid increase in New Business reflect the strength of this progression. Moreover, Services business returned to growth thanks to an acceleration in high value-added Engineering studies, establishing a strong catalyst for the industry’s universal transition towards the digital factory. Going beyond the traditional PLM1offers based on product design and development, ESI's Virtual Prototyping solutions now enable our customers to seek total control of their products' entire lifecycle, i.e. to further anticipate their overall performance from launch to phase-out (PPL2). These good first-quarter figures support our short- and medium-term growth and profitability prospects ".

1- PLM: Product Lifecycle Management, which is concerned with the effectiveness of product development until commercial launch.
2- PPL: Product Performance Lifecycle, which focuses on optimising the product's whole "post-development" lifecycle, i.e. the way it is integrated into and performs within its operational environment, including operational maintenance, until the end of its useful life. 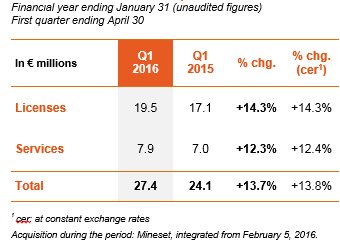 Sales from acquisitions totalled €1.6 million, a contribution of 6.6% on the total growth, mainly from the Licenses business of ESI ITI GmbH, acquired in January 2016.

Exchange-rate movements had a neutral effect during the period, with the rise in the Japanese yen offset by the fall in the US dollar and the South Korean won against the euro.

Licenses revenue amounted to €19.5 million, up 14.3% year-on-year, including organic growth of 8%. That growth reflects the upturn in New Business, which continued the trend seen in the third and fourth quarters of 2015 and grew 43% (27% in organic terms). New Business accounted for 18% of total Licenses sales, against 14% in Q1-15. In particular, there were new international contract wins in the electronics, marine and heavy industry sectors. The installed base grew 8.7% (3.5% in organic terms) even after the 35% surge seen in Q1-15, and the repeat business rate was very high at 93.2%.

Services revenue totalled €7.9 million, up 12.3% or 5.1% in organic terms. After jumping 18% in Q1-15, growth in Q1-16 was driven by the new acquisitions (+7.4% impact) and the ongoing strong momentum in engineering studies, one of ESI Group's core businesses.

In Q1-16, Asia accounted for 47% of total sales versus 41% in Q1-15, Europe 37% versus 39%, and the Americas 16% versus 20%. The geographical breakdown of sales reflects strong cyclical growth in Licensing in Asia, supported by innovative projects in the automotive, aerospace and energy sectors, particularly in Japan.

The BRIC countries accounted for 10.4% of total sales during the period.