Alain de Rouvray, ESI Group’s Chairman and CEO, comments: "The solid performance in the first half-year shows the widening adoption of ESI Group's Virtual Prototyping solutions and reflects the transformation of leading industrial firms to the smart digital factory. This structural trend drives strong growth of Licenses, particularly in the installed base, and is indicative of the strength of ESI's industry standard solutions and the Group's robust business model. The restructured Services division, although held back by some cyclical effects, posted healthy growth in high value added engineering studies  which eventually lead on to recurrent License sales. The cost control policy also delivered further substantial improvements to profitability without reducing the R&D investment which is core to the Group's development strategy. Notably, ESI Group continues to differentiate itself clearly from its competition by technological innovation and adoption of disruptive technologies, including those represented in recently acquired activities. The unique positioning of ESI's solutions in the future markets for Virtual Engineering, coupled with high-performing strategic international partnerships, amplifies the solidity of the Group's activity and enables us to look ahead with confidence over the short and medium term." 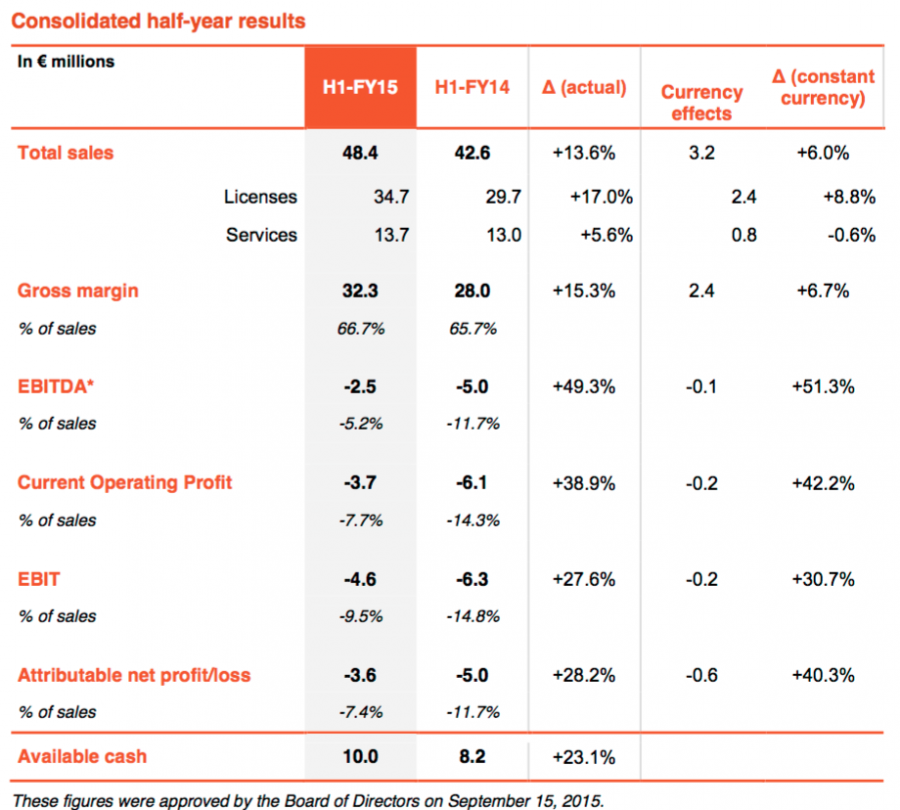 Revenue for the 1st half of 2015: strong growth in licensing and solid performance in high value added engineering studies

H1 revenues – Revenues for the 1st half of 2015 amounted to €48.4 million, a healthy 13.6% growth in actual terms (+6.0% at constant exchange rates). This strong performance reflects the dynamism of the Licensing activity and was helped by currency movements over the period, mainly in the US dollar, Japanese yen and Korean won. Recent acquisitions mainly concerned technologies requiring further development and their revenue impact was therefore limited at this stage to €0.1 million. The product mix shifted toward Licensing activity, which accounted for 71.7% of revenues compared to 69.6% in the 1st half of 2014.

H1 Services – Services revenue was €13.7 million, up by +5.6% at actual exchange rates (-0.6% at constant exchange rates). The success of engineering studies, the core of ESI Group's business, where revenues rose by +19.4% (+11.9% at constant rates), reflected the continued refocus on high expertise, high value added projects, particularly in Japan, France, Germany and the US. This structural trend was, however, masked by declines in sales of other services evident in the 2nd quarter.

H1 geographic mix – Over the period the geographical distribution of revenues in actual currency shifted toward Asia (41.1% vs. 40.2%) and the Americas (20.4% vs. 17.1%), and away from Europe (38.5% vs. 42.7%) where sales were held back by Russia. These trends, albeit amplified by the fall in the euro against the US dollar and Asian currencies, reflect very strong License sales at constant exchange rates; up by an impressive 24% in the USA and 26% in China.

At actual exchange rates, activity in BRIC countries contributed 12.2% of revenues compared to 13.3% in the prior year period as growth in China and India was offset by the still difficult environment in Russia.

Results for the 1st half of 2015: improved profitability

The published EBITDA now includes the impact of capitalization of R&D spending and the provisions for depreciation of trade receivables. The change reflects the Group's aim to better represent the business value of its EBITDA and thereby better represent an innovation strategy which is based on acquisitions of technology and R&D projects. These strategic investments, the engine of future development, are an integral part of the Group's intangible assets.

EBITDA is now reported at - €2.5 million, an increase of 49.3% on the prior year period when calculated on a consistent basis, and reflects a considerable improvement in profitability. Without the change in definition, EBITDA would have been - €4.7 million, up by 1.7% on the prior year period. Eliminating the effect of acquisitions over this first six months, EBITDA would be - €3.8 million, up by 20.5%, again showing the clear improvement in the Group's underlying performance thanks in large part to the cost control policy. (See annexed reconciliation table.)

Gross margin was 66.7% of actual sales, a 1 percentage point improvement thanks to the shift in the product mix toward Licenses.

The Group's cost control policy helped to contain the growth of General and Administrative (G&A) and Sales and Marketing (S&M) spending to below revenue growth. G&A expenses were €8.1 million, 16.8% of revenues vs. 18.5% the prior year. S&M costs were €18.0 million, 37.3% of revenues against 38.2% previously.

Spending on R&D was €13.9 million (not including the CIR research tax credit), up by 23.5% (+14.1% at constant exchange rates). This investment includes spending on existing technologies and recent initiatives for external growth, including active security in transportation, Cloud deployment, big data visual analytics and fluid thermodynamics. Excluding acquisitions, the R&D spend was €13.4 million. After adjusting for the impact of the capitalization of the development costs and the CIR, R&D costs were €9.8 million, down by €0.1 million. The figure was boosted by lower amortization over the period, as determined by the timing of the releases of new versions of ESI software.

The improvement in Current Operating Profit was also due to S&M and G&A expenses growing more slowly than revenues; a deliberate policy in line with the Group's strategy to boost profitability.

The smaller increase in EBIT margin reflected the costs of technological acquisitions over the period.

After taking into account the financial result and tax, the attributable net loss was - €3.6 million, a significant 28.2% improvement on the 1st half of 2014.

As a leader in supporting the transition to the digital factory, ESI Group is actively pursuing a strategy of integrating future technologies in its offering as it progresses on a path towards democratizing Virtual Prototyping throughout the industrial ecosystem. With this in mind, the Group's technology platforms are built to encourage total, immersive and real-time integration of all stages of industrial product development, from concept/design to prototype manufacture and regulatory pre-certification. Innovative visualization technologies like IC.IDO and the availability in Cloud/SaaS mode of the VPS/VMS virtual prototyping chain are considerably increasing the collaborative potential of ESI Group solutions and offer the opportunity to radically reduce costs of acquisition and ownership.

By building on its unique assets and products, with technology that has been substantially enhanced by recent acquisitions, ESI Group aims to extend the use of its solutions to everyone involved in the product development process (engineers, technicians, management, marketing, etc.). Medium term, these growth areas should sustain the commercial momentum the Group has been seeing for several quarters.

Reconciliation table following the change in the definition of EBITDA 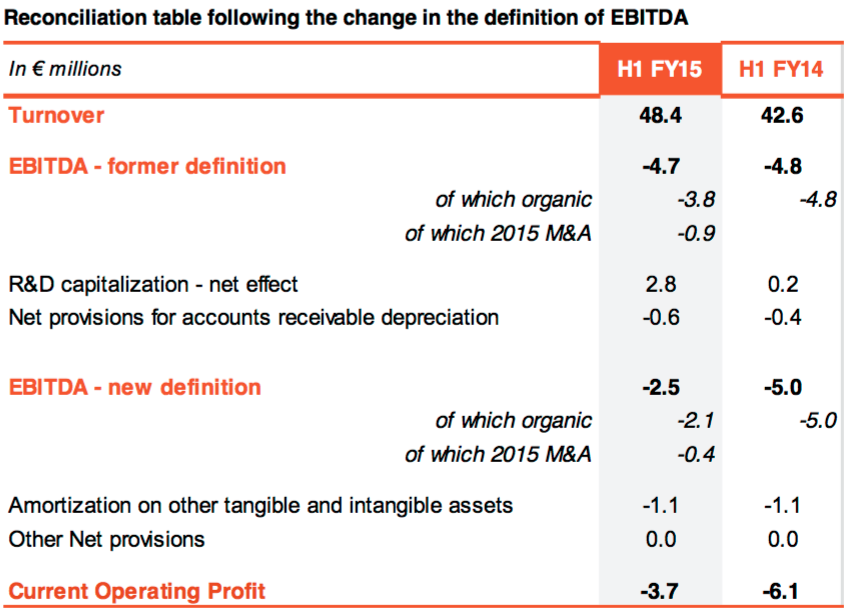