Commenting on the quarterly results, Alain de Rouvray, Chairman and Chief Executive Officer of ESI Group, said: “This quarter marks a milestone in the introduction of our transformational offer to answer Industry 4.0 grand challenges. While we continue to strengthen our Virtual Prototype core business based on the virtual pre-certification of innovative industrial products, we are concurrently building our new Hybrid TwinTM disruptive solutions to represent the used product in its ‘in-service’ operational conditions.

This strong transformational approach builds upon ESI’s recent acquisitions of innovative technologies (Big data, IoT, A.I.) to virtually shape in co-creation with our lead strategic customers the new innovative designs, materials and manufacturing processes required for their connected and assisted products of the future. It targets product predictive performance and maintenance, to optimize repairs, facilitate certification update, and minimize recalls. Once the brand-new Product is ‘right the first time’ thanks to its pre-certified Virtual Prototype, it must be kept right when in-Service, and perform right in real life with its connected and operationally assisted ‘Hybrid TwinTM’.

As anticipated, the lackluster of our third quarter financials does not realistically reflect the considerable transformative added value being built with our strategic partners and global industry leaders. So, we reiterate our strong confidence in ESI’s ability to recover its growth momentum in 2018. This view is reinforced by the enthusiasm already shown by our partners and early adopters worldwide.

Change in third-quarter and year-to-date sales 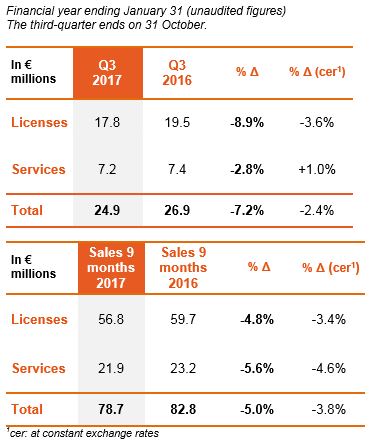 Sales for the 3rd quarter

Sales for the 3rd quarter at constant exchange rates were down 2.4% year upon year to €24.9 million. There was a negative currency effect of €1.3 million during the period mostly related to the depreciation of the Japanese yen against the euro.

Sales from the Licenses business fell 3.6% to €17.8 million, reflecting the impact of repositioning a contract in Asia for approximately €1 million. This contract will be renewed in the fourth quarter of the year.

Sales for the first nine months of the year came in at €78.7 million, down 3.8% at constant exchange rates. As in the first-half of the year, these figures reflect a strong base effect due to the excellent performance in the first nine months of 2016 and the impact of the Group’s transformation strategy. Sales driven by the change of perimeter amounted to €0.4 million, corresponding to the acquisition of Scilab Enterprises in February 2017. There was a negative currency effect of €1.1 million during the period due to the depreciation of the Japanese yen against the euro.

The product mix remained stable during the first nine months: Licenses generated 72.2% of total revenue (versus 72.0% in the same period in 2016).

The Services business reported a 4.6% drop in sales to €21.9 million (at constant exchange rates) but revenue from Special Projects continued to rise, reflecting the growth in co-creation and methodological transformational projects that harness new embedded technologies.

Europe accounted for 40.4% of total revenue (at constant exchange rates), compared to 38.3% for the first nine months of 2016. The contribution of the Americas region was stable at 16.0% while Asia contributed 43.6% of total revenue (versus 45.7% last year).