Commenting on full-year sales, Alain de Rouvray, Chairman and Chief Executive Officer of ESI Group, said: “Our fourth quarter of 2017 marked a return to growth in Licenses at constant exchange rates. However, the strong investments in the Group’s transformation, aimed at securing the success of the “Objective 2020” five-year plan, will substantially impact the 2017 EBIT. On the other hand, the reported rebound in Licenses bodes well for better sales momentum in 2018, supported by the benefits of the strategic investments and management reorganizations made over the last two years. Our new value proposition, based on the Hybrid Twin™, aims at supporting our customers on predicting their products’ performance and piloting once in operation. This approach has required an in-depth adaptation of our marketing strategy as well as a new alignment of our sales and support teams. Meanwhile, the excellent performance of our Virtual Prototyping core business should continue to boost ESI’s competitiveness in 2018 as the manufacturing industry experiences an unprecedented and accelerated change driven by the demands of the ‘Smart Factory’ and of the ‘Outcome Economy’.

Change in full-year and fourth-quarter sales 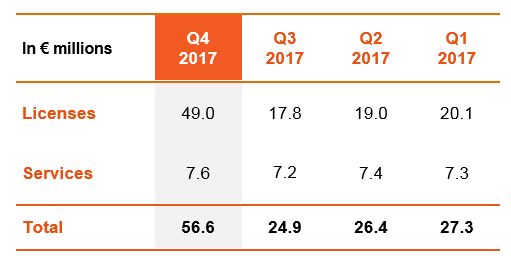 Q4 2017 sales at constant exchange rates were stable year-on-year at €56.6 million. At current rates, a negative currency (Forex) effect of €1.4 million was registered due to the depreciations of the Japanese yen and the US dollar against the euro compared to Q4 2016.

Sales generated by the Licensing activity rose by 3.1% on Q4 2017 to €49.0 million (at constant rates), reflecting the rebound in business growth after the 3.4% drop witnessed over the first three quarters of the year. A 14.8% increase in New Business contributed to this improvement.

Full-year sales declined by 2.0% to €135.3 million at constant exchange rates. There was a negative Forex impact over the year of €2.5 million, mainly reflecting the depreciation of the Japanese yen – and to a lesser extent the US dollar. The product mix shifted towards Licenses, which contributed 78% of total sales, compared with 77% last year.

Revenue from Licenses was stable year-on-year at €105.7 million at constant exchange rates. The Repeat Business rate was 82.4% at constant rates (80.7% at current rates), reflecting a lower share of revenue from Paid-Up Licenses (PUL) in 2017 and therefore representing a positive factor in future contract renewals. New Business, also affected by PUL impact, remained stable at constant rates at €17.8 million, compared to €17.9 million for 2016 (€17.6 million at current rates).

The Services business reported a 6.9% decline in revenue to €29.5 million (at constant exchange rates). As a reminder, Services grew by 16.5% in 2016 due to exceptionally favorable conditions in Japan. The increase in Special Projects as a proportion of Services (17.1% vs. 15.6%) confirms the trend already witnessed in 2016, driven by innovative co-creation projects that harness new technologies developed by the Group.

The business volume in the Asia-Pacific region slightly decreased and accounted for 38% of Total Revenue in 2017, against 39% the previous year (at constant exchange rates). The contribution of the Americas and Europe remained stable over the year at 16% and 46% of sales, respectively.

Our strategic transformation plan, will impact 2017 EBIT which is estimated to come in at between €7.0 million and €8.0 million. Indeed, ESI deployed major strategic investments over the period in the context of its “Objective 2020” five-year plan and engaged in building new solutions around the recently acquired technologies and in restructuring the Group’s organization in line with the new ‘Product Performance Lifecycle™’ (PPL) value proposition. These investments focused in particular on upgrading a number of field offices, training and realigning the teams, and on marketing initiatives to showcase ESI’s innovative and disruptive solutions; for example, at the Consumer Electronics Show (CES) in Las Vegas. This substantial expenditure aims to strengthen our support for our customers’ digital transformation towards the ‘Outcome Economy’. As part of this process, our new Silicon Valley office (San Jose, CA) now hosts a development team specialized in new technologies such as Machine Learning, Artificial Intelligence, Internet of Things (IOT) and the Cloud, together with a marketing, sales and support team to foster West Coast customers.

The acquisition in early 2017 of ‘Scilab’, publisher of an open source numerical analysis software and recognized internationally by a community of over one million users, constitutes a powerful vector for increased visibility and democratization of the Group’s approach. By consolidating its position in the pre-project design phase, the segment on which Scilab is focused, ESI seeks to harness its Hybrid Twin™ solution to provide manufacturing businesses with complete control over their  products entire lifecycle, including anticipation of wear and tear for predictive maintenance and repairs, beyond design, manufacturing and regulatory certification of the product ‘as brand new’.

A number of significant milestones in the Group’s “Objective 2020” five-year plan were achieved in 2017. The plan aims to align the business and executive management around the Group’s new value proposition underpinned by the Product Performance Lifecycle™ concept and the Hybrid Twin™ solution. The management organization is now re-structured around three business pillars, namely: Engineering (design and development of industrial products), Manufacturing (fabrication of products) and In-Service (usage, piloting and maintenance of products from launch to repair and ultimate withdrawal), in line with the demands of Industry 4.0, the Smart Factory and the Outcome Economy.

This fundamental transformation, which has impacted our short-term sales performance, aims to bring the sales force in line with the operational support requirements of industrial clients via a regional local coordination structure based around customer Account Managers focused on value selling, and Technical sales Engineers to foster accelerated technical and methodological change.

To provide effective support for this operational governance strategy, ESI Group has strengthened its Group Executive Committee with the appointment of Angelita Reyes as Group Human Resources Director and the promotion of Christian Matzen to the position of Executive Vice-President Sales and Marketing. Furthermore, the promotion of Dominique Lefebvre as Director of Product Operations and his appointment as a member of the Group Executive Committee strengthens the management alignment with the Group’s strategic vision.