Commenting on the half-year results, Alain de Rouvray, Chairman and Chief Executive Officer of ESI Group, said: “In the wake of 2016, which featured fine performances across all indicators and the consolidation of a number of new acquisitions, we have ramped up our five-year strategic transformation plan – “Objective 2020” – designed to keep pace with the economic and industrial trends of the new “Outcome Economy”. Within this context of deep transformation, our ongoing drive to adapt our operational resources in H1 2017 took its toll on results for the period, which also suffered from a prior-period comparable basis. Priority was given to investments initiated in the first quarter of the year to provide support for the launch of our disruptive ‘PPL’ (Product Performance LifecycleTM) approach. The Group’s new solutions are based on the shift of Virtual Prototyping towards a connected Hybrid TwinTM; making it possible, for example, to provide virtual support for predictive maintenance, as well as for production control and assisted or autonomous driving. Our solutions are tackling the key challenges of the Industry of the Future by providing businesses with complete control over a product's entire lifecycle, from design to ultimate withdrawal, through manufacturing of the new product and operational maintenance of the used product that factors in the consequences of wear and tear, including repair of the damages sustained while in service.

This in-depth transformation in our offering is expected to last for several quarters. But thanks to the compelling investments, the deployment of Hybrid Twin™ solutions should enable the Group to reap the benefits of the exceptional innovation and growth potential inherent in this new – technologically and economically – "disruptive" positioning. 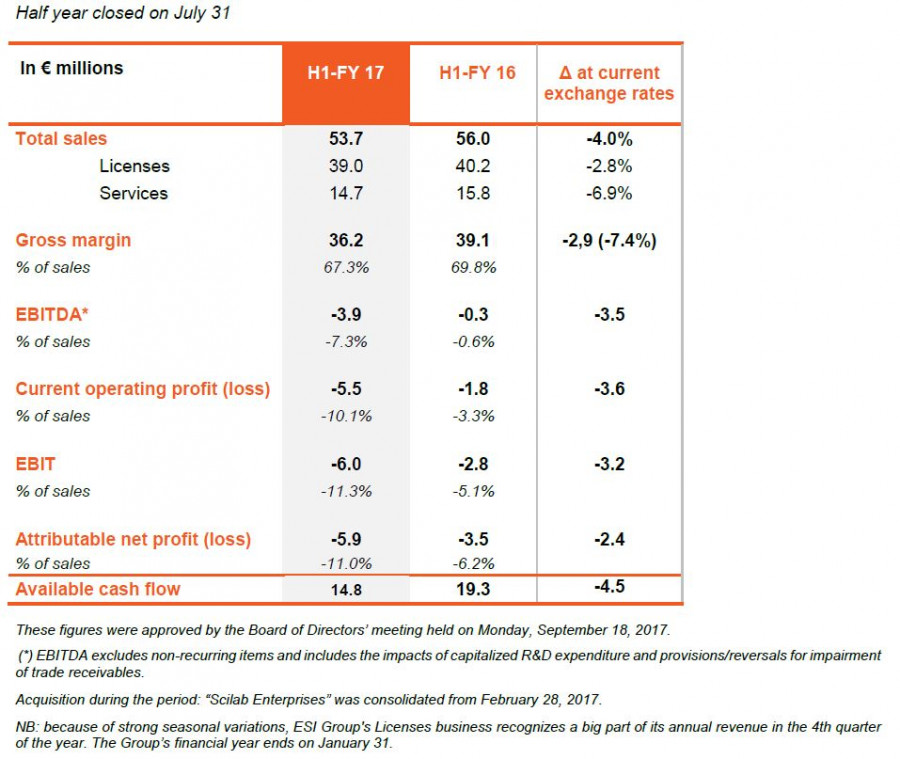 First-half 2017 sales came in at €53.7 million, down 4.0%. Sales driven by the change of perimeter amounted to €0.3 million, and correspond to the acquisition of Scilab Enterprises in February 2017. There was a mild positive currency effect of €0.2 million for the period, the favorable effect from the US dollar and Korean won partially offset by the negative impact of movements in sterling and the Japanese yen.

This decrease reflects both the base effect following the exceptional performance in H1 2016, and the impact of the transformation phase on both existing and new business.

The product mix remained stable year-on-year, Licenses contributed 73% of total sales, compared with 72% in the prior period.

Licenses revenue declined by 2.8% year-on-year to €39.0 million. Most of this decline concerned the sale of perpetual licenses (PUL) in H1 2016 and does not reflect a recurring issue in the install base.

Services revenue was down by 6.9% to €14.7 million. It should be recalled that Services grew by 15.4% in H1 2016 due to a cyclical and exceptional performance of Japan.

ESI’s geographic sales mix reflects a relative performance of global activity on the semester, better in Europe (up 2.8%) than in the Americas (down 2.4%) and Asia (down 10.3%).

Gross margin came in at 67.3%, compared to 69.8% in H1 2016. This lower figure was mainly due to an unfavorable product mix within the Services activity.

In accordance with the Group’s strategy of investing in cutting-edge technology, R&D investment has been pursued at a high level. R&D expenditure rose 9.0% to €16.9 million (excluding the French Research Tax Credit ‘CIR’), reflecting ESI’s constant focus on the emerging technologies that underpin its disruptive PPL approach. These investments represent 43.4% of Licensing revenue (amplified by the strong seasonality effect). However, once the Research Tax Credit and capitalized R&D expenditure are taken into account, total R&D costs recorded in the P&L amounted to €13.5 million, an increase of 3.4%.

EBITDA was a negative €3.9 million, compared to a negative €0.3 million in H1 2016. This decline reflects a continuation of the R&D investments and a 3.1% increase in Sales & Marketing (S&M) costs which represent on the semester 36.3% of total sales. General and Administrative (G&A) costs dropped by 3.5% year-on-year and represented 16.1% of total sales.

As a result of the decline in EBITDA, the Group reported a current operating loss of €5.5 million and negative EBIT of €6.0 million, down by €3.6 million and €3.2 million, respectively, on H1 2016. The Financial Result remained stable year-on-year at negative €1.6 million and the Group’s attributable let loss for the period was €5.9 million, compared to a loss of €3.5 million for prior period.

It should be recalled that these financial results reflect traditionally the strong seasonality of Licensing revenue, lower on the first semester.

Strategic transformation to deliver solutions for the Industry of the Future

Integration of new technologies as part of ESI’s PPL approach

By harnessing the PPL approach, ESI takes a giant step along the road to becoming a pioneer in helping businesses transition to the Smart Factory and Industry of the Future. The new solutions aim to provide businesses with complete control over an “as new” product's entire lifecycle – beyond the virtual development and pre-certification phase which is well covered by Virtual Prototyping. They also aim to take into account the product’s lifecycle “as used” and its potential damage, in a representative “in service” ecosystem. This disruptive approach makes it possible to develop a Hybrid TwinTM of the Cloud connected product (IoT), that will anticipate, follow and pilot its operational performance, and plan its maintenance – from product commissioning to operational withdrawal – a crucial element in the transition to the Industry of the Future.

In order to promote this strong leading-edge strategy, ESI has adapted its scientific resources and strengthened its Scientific Committee – made up of internationally renowned internal and external experts – and its scientific executive management. This continuous strengthening has provided the Group with access to European and global special new projects, in co-creation with industrial strategic partners, who act as pioneers and validate the technologies that the Group has acquired. It also provides opportunity to strengthen the ties and synergies with the academic world.

ESI Group has also stepped up its involvement in major tech events such as CES (Consumer Electronics Show) in Las Vegas, Salon du Bourget in Paris and the Simulation and High-Performance Computing Forum at Teratec (Exascale computing), the international meeting for Simulation, Big Data and Machine Learning. We have been able to use these key industry events to pave the way for new partnerships using the PPL approach and to successfully showcase the innovative solutions developed by the Group.

In order to bring its sales force into line with the demands of the PPL approach and those businesses wishing to transition to the technologies of the Factory and Industry of the Future, in 2017 ESI initiated a major overhaul of its sales force, especially in the US. This transformation will have a short-term influence on sales performance and aims to bring the sales force into line with the operational support needs of industrial clients through a regional coordination structure based around customer account managers who engage in value selling, and sales engineers in support of strong technological and methodological changes.

The Group has also set up latest generation demo centers to showcase ESI’s Immersive Virtual Engineering (IVE) solution (IC.IDO) and it has strengthened its support and marketing teams and learning centers. These are internationally available to all users of the Group’s solutions. For example, the new Silicon Valley (San José, CA) office hosts a development team specialized in new technologies such as Machine Learning, Artificial Intelligence, Internet of Things (IoT) and the Cloud, together with a local and regional marketing, sales and support team.