Alain de Rouvray, ESI Group’s Chairman and CEO, comments: "The very solid performance over the period, as measured by our economic indicators, clearly and again illustrates the market relevance of our unique strategic positioning based on Immersive Virtual Engineering (IVE1) of the full lifecycle of industrial products.

At IVE’s core are our Virtual Prototyping and Virtual Reality integrated solutions which are now being extended to include “Big Data”, “Machine Learning” and “IoT2”. Leveraging our recent acquisitions our proven Physics based modelling may now be coupled with the end-to-end management of the product full lifecycle, i.e. from design and development (traditional “CAD-CAE-PLM3”) to performance in operation, a critical step towards aided and autonomous products (the new disruptive “PPL4”).

During this first semester Licenses sales experienced solid growth, in particular with new business and high level of repeat business. In parallel the significant progression in high valued-added services demonstrates the specific need to support industrialists, adapted to their maturity level in transition to IVE. The continued improvement of our profitability indicators confirms that our continuously monitored discipline of execution allows us to combine the dynamics of profitable and sustainable growth with high level of investments.

In this demanding global context and accounting for the renewed challenges of the timely integration of our several recent acquisitions, we expect our dynamic sales trend to continue with solid, diversified and balanced growth.” 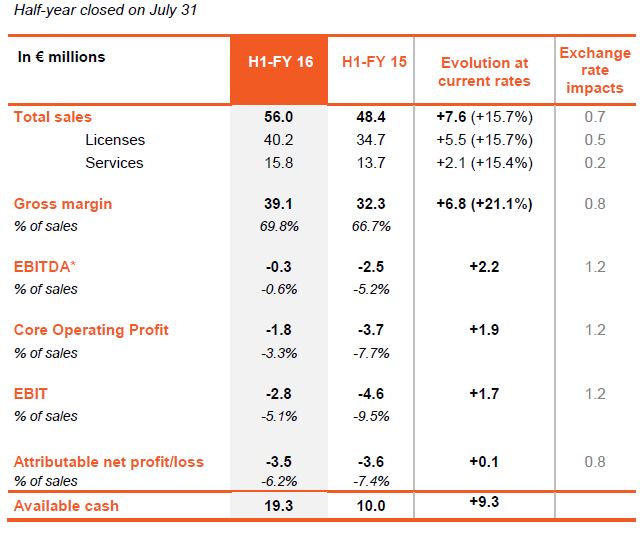 Changes in revenue by quarter

H1 2016 Total revenue - Revenue for the first half was €56.0 million, an increase of +15.7% at current rates. Revenue from acquisitions was €3.1 million, primarily from the business activities of ESI ITI GmbH which was consolidated on January 6, 2016. The positive exchange impact over the period was moderate at €0.7 million. It was tied to the net strengthening of the Japanese yen compared to the euro, that more than compensated the unfavorable change in other currencies, primarily the Korean won, the Indian rupee, the US dollar and the pound sterling. The product mix remained stable with Licensing accounting for 71.8% of total revenue compared to 71.7% for the same period of the previous fiscal year.

H1 2016 Licenses - Revenue generated by the Licenses business grew strongly at +15.7% at current exchange rates (‘cer’) compared to the first half of the previous fiscal year, notably sustained by strong performance in Asia. New business grew significantly, up +24.5% (+11.1% in organic terms) and confirmed the momentum seen during 2016 first quarter. Recurring growth in the installed base was up +14.4% at current rates (+8.6% in organic terms). It was particularly dynamic following positive performance in the first half of 2015 (+26.9% at current rates). The rate of repeat business therefore remained high at 91.8%.

H1 2016 Services - Revenue growth in Services was up +15.4%, spurred by ongoing strategic development in high added value engineering studies, the core of our innovative business and an essential competitive advantage, which grew by +18.2%. This trend was particularly apparent in Japan and is supported and accentuated by our recent acquisitions. It also confirms the relevance of our business model which promotes robust growth in Licensing fostered by a solid Services business that supports and sustains the innovative and functional value of our proposed solutions.

Gross Margin increased significantly reaching 69.8% of revenue versus 66.7% in the first half of 2015. The growth was sustained by steady improvements in the gross margins of both Licensing and Services activities, the latter benefiting from the added focus on high value engineering studies and advanced innovative projects.

Over the period, the cost of Sales and Marketing (S&M) and General and Administrative costs (G&A) increased globally by +6.4%, compared to the revenue growth of +15.7%. These costs represent respectively 33.8 % and 16.0 % of total revenues, a 432 basis points drop from the previous semester. This development reflects a continuous cost control discipline during the period.

In line with our strategy based on technology innovation, R&D investments increased by +11.7% at current exchange rates. R&D expenses reached €15.5 million (excluding the French Research Tax Credit, 'CIR') and accounted for 38.7% of Licenses revenue over the period, a 140 basis points drop from the previous semester. This high first semester relative rate needs to be put into perspective given the strong seasonality of the licenses business. The continuous investment was for existing technologies as well as for the latest external growth activities. The total amount of R&D posted to the P&L income statement after taking the CIR and capitalization of development costs into account was €13.1 million at current exchange rates, up +33.0% compared to the first half of 2015, notably due to the lesser impact of organic R&D, and to the increased release of new software versions.

EBITDA increased significantly to -€0.3 million, up +€2.2 million compared to the first half of 2015. This performance was nevertheless impacted by the lower capitalization of R&D costs. Core Operating Profit (ROC) was -€1.8 million, with a -3.3% to the revenue margin, a marked improvement over the previous year.

EBIT was -€2.8 million, that is, a margin of -5.1% on revenue, also up considerably compared to the first half of 2015. The increase is more limited than for EBITDA and ROC, primarily consequent to non-recurring costs linked to amortization of the intangible assets of ESI ITI GmbH.

Attributable net profit/loss was -€3.5 million, that is, a net margin of -6.2% on revenue. It consists primarily of tax income of +€1.4 million and financial loss of -€1.6 million. The latter was impacted by the negative revaluation of certain foreign currency hedging tools, especially following the strong Yen increase in the six months period.

ESI's Immersive Virtual Engineering (IVE) solution offering for the full development and fabrication of industrial products is already significantly challenging the traditional PLM market. The solution is based on the creation of a reliable ‘physics based’ Virtual Prototype, manufactured, assembled and articulated component by component, and animated at the product ‘system’ level by the multiple connections, (e.g.: mechanical, hydraulic, electro-magnetic, etc.) that model component interactions within the operational and functional full product system. This extremely effective Virtual Prototyping approach is further enhanced by our unique Virtual Reality (VR) solution (IC-IDO) which allows users to share across distributed interdisciplinary teams worldwide and in real time their intended product as in real life, in an immersive 3D-4D environment, to enhance, facilitate and accelerate the decision-making process throughout the product development phase.

However, to this date not much if anything is available to anticipate, improve and control what happens to the product after rolling off of the assembly line to be handed out to users…”like us” ! This is where ESI’s next generation extended IVE approach comes in, and inaugurates the new era of “Product Performance Lifecycle” (PPL), where the new product is further experienced and managed in the Virtual PPL space in its predicted and observed real life operational context.

With this objective in mind and leveraging several years of carefully planned recent acquisitions, our proven IVE solutions are now solidly positioned to be extended to include the best promises of the Information and Communication Technologies (ICT5), which are poised to dramatically transform all industries towards the new paradigms of: ‘Smart Factory’, Industry 4.0, Horizon 2020 etc., namely incorporating the exponential technologies of: “Big Data”, “Machine Learning”, ‘Cloud mobility’ and “IoT”.

This highly promising and transformational approach carried by our IVE and PPL strategies, is a source of considerable added value and benefits for most industries. It leads to a complete control of the product full lifecycle, including the basic phases of design and development of standard PLM while adding the disruptive virtual modeling of product performance in real life operation, connected or not, and addressing predictive maintenance through the full service life of the product. This unique value proposition, incorporating many disruptive innovations, comes from an original and distinctive technology growth strategy, pursued for a very long time by ESI and across multiple international partnerships and highly innovative 'co-creation' industrial projects, to firmly position the Group to address the whole manufacturing and operational lifecycle of the product.

This new PPL approach builds on the ability of ESI's IVE solutions, on the one hand, to combine and “articulate” detailed 3D (spaced)-4D (time-dependent) level models, and on the other hand to integrate and “animate” condensed and simplified 0D-1D level system models representing the complexity of the full product in real life operation. This highly innovative multi-level modeling opens the way to the development of smart products with increasing degrees of autonomy, expected to exploit the exponential growth of Information and Communication Technologies (ICT) and to derive huge benefits from Big Data Analytics, Machine Learning, the Cloud and the Internet of Things (IoT).

In this respect ESI Group recently took a highly relevant initiative when it shared its complete, transformational endeavor to connect its Virtual Prototyping expertise with the demand for controlled operational performance of autonomous and interconnected industrial products.

Concurrently ESI is also making significant efforts to accelerate the commercial deployment of its IVE/PPL transformational approach and to target the very extensive and rapidly expanding community of professionals involved in product manufacturing and industrial processes for connected (or not) innovative and ‘smart’ products.

For added momentum, ESI is also strengthening its global ecosystem, with, for example, the recent signature of a new strategic partnership with the Chinese ICT global leader “Huawei”. The two companies are consolidating their collaboration in the fields of High Performance Computing (HPC) and Cloud flexibility to provide innovative solutions for industrial manufacturing, in China, Europe and the rest of the world.