Commenting on the full-year results, Alain de Rouvray, Chairman and Chief Executive Officer of ESI Group, said: “The operational performances over the year are significantly impacted by the transformative actions implemented to successfully deploy the new value proposition of the Group that addresses the emerging needs of our clients. This proposition is tied to the Outcome Economy and the Industry of the Future, drivers of unprecedented and accelerated changes in the economic and competitive context for manufacturing industries. It positions the Group as a catalyst and integrator of our customers’ digital transformation as they apply our multi-domain Virtual Prototyping solutions.

To consolidate our solutions, adapt our sales strategy and build methodological support teams for customers, we have implemented an active investment policy and a deep operational reorganization. Our disruptive solutions enable our customers to reduce time-to-market for innovative and more performant products in operation, targeting a “zero physical tests” methodology.

The major evolutions achieved in 2017, and pursued in 2018, pave the way for a new growth momentum. The shift towards Integral Virtual Prototyping in the pre certification phase and the Hybrid TwinTM to anticipate the “as-used” product performance in-Service have accelerated this trend. In this new and particularly aggressive and promising market, ESI has a unique positioning.” 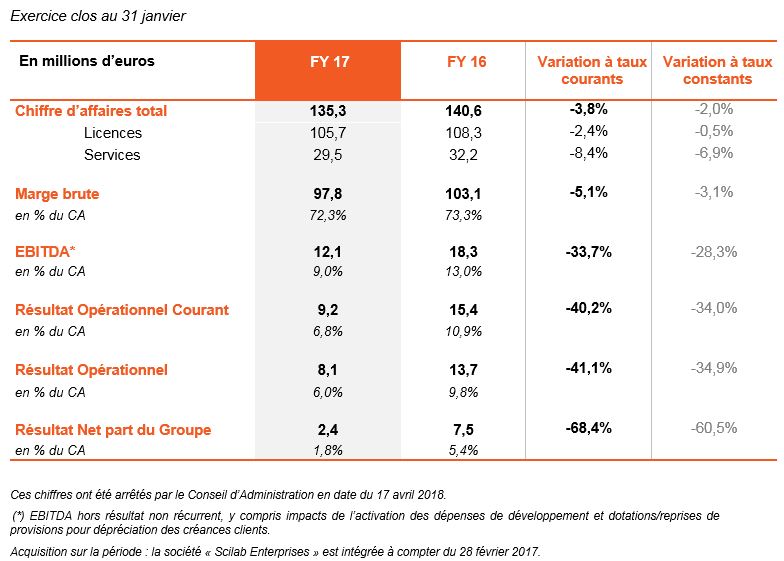 As announced, full-year sales totaled €135.3 million, down 3.8% and 2.0%, respectively, at current and constant exchange rates. There was a negative forex impact over the year of €2.5 million, mainly reflecting the depreciations of the Japanese yen and to a lesser extent the US dollar.

There was a favorable shift in the product mix towards Licenses, which contributed 78% of total sales, compared with 77% last year.

Services revenues declined by 8.4% to €29.5 million for the year in the wake of the exceptional performance in Japan in 2016.

ESI’s geographic sales mix reflects the slight drop in business in Asia which now contributes 38% of total revenues against 39% last year. The contribution of the Americas and Europe remained stable over the year at 16% and 46% of sales, respectively.

Gross margin came in at 72.3%, compared to 73.3% in 2016, showing a decrease attributable to a change in the services delivered. In 2016 there were several one-off projects in Japan that had a positive impact on margin. Also, the volume of Special Projects increased in 2017. These projects are at the core of the innovation using new technologies developed by the Group and have the objectives of cocreation with customers and intellectual property development. Gross margin for Licenses remained stable year on year at 85%.

Within the scope of the strategic transformation plan, investments in R&D were maintained at a high level and grew 6.7% on the year to €34.9 million (€32.7 million in 2016). These considerable investments reflect the efforts undertaken to develop the Group’s new disruptive technology offering underpinned by the Hybrid TwinTM approach. These investments represented 33.0% of Licensing revenue, compared to 30.2% in 2016. Once the research tax credit and capitalized R&D expenditure are taken into account, total R&D costs recorded in the P&L amounted to €28.7 million, an increase of 6.5%.

The adaptation of sales and marketing strategy helped to enhance the sales force and the visibility of ESI Group. The process of bringing the sales force into line with our value proposition and the operational support requirements of customer account managers and technical sales engineers led to changes at local level and this impacted sales performance for the year. S&M costs, which totaled €41.4 million (vs €41.8 million in 2016), i.e., 30.6% of revenues, do not properly reflect these investments as they include the reversal of provisions for doubtful receivables, particularly in China.

G&A costs amounted to €18.5 million (compared to €18.9 million in 2016) and represented 13.7% of revenues. Expenditure was contained while ensuring that the Group has a solid distribution network and larger offices for local support teams specialized in new technologies to develop and grow.

EBITDA fell from €18.3 million to €12.1 million, giving an EBITDA margin of 9.0% for the year, compared with 13.0% in 2016. This drop is a result of the transformation plan which weighed on growth, and increased investments in R&D.

An ongoing and controlled transformation

2017 was a year of transformation that featured major strategic investments and a reorganization around three pillars. It represented an essential milestone, before a better growth momentum as early as 2018. The impact of this transformation is based on the value creation and the credibility of our solutions, clearly confirmed by our relations with our innovative customers and partners.

Structuring ESI’s offer development around the three pillars of our core activities will enable it to leverage all of the strength of its two historic core businesses – Engineering and Manufacturing – in order to provide industrial clients with Virtual Prototyping solutions for developing and manufacturing industrial products. The French vehicle manufacturer startup Gazelle Tech is a pioneering high potential example. It succeeded in developing its concept of “sustainable mobility for all” with ESI’s Integral Virtual Prototyping solutions, by designing, certifying and producing, in less than 3 years, a vehicle which is intended for the emerging countries market.

Throughout the year 2017, ESI also strengthened its collaboration with AP&T, the hot forming systems builder. Initially a supplier of individual tooling software for virtual testing, ESI has progressively emerged as a strategic partner for AP&T, enabling the company to meet Industry 4.0. challenges for the manufacturing of its smart assembly lines with an Integral Virtual Prototyping solution; chaining the virtual tests that now replicate each individual step in the manufacturing process.

The third core activity – In-Service – couples Big Data and Artificial Intelligence to complement the Virtual Prototype with collected data in operation (IoT) and enriched by Machine Learning. This pillar is the catalyst for the new value proposition. This sets ESI well apart based on its ability to partner with clients throughout a product’s entire lifecycle, including in its “as used” state after it has been put on the market. ESI Group aims to harness this transformation to target a much broader customer base that includes engineering consultants, manufacturing plants, product operators that are concerned by maintenance cost, and insurance companies.

At this stage of its development, thanks to the high growth potential of its market, ESI Group has the essential assets it needs to successfully realize its vision and the adoption of its new value proposition.