Alain de Rouvray, Chairman and Chief Executive Officer of ESI Group, commented: “The performance delivered in 2016, both in terms of growth and profitability, again confirms the relevance of ESI Group’s business model and strategic positioning. The significant increase in profitability was achieved without compromise on the R&D investment which lies at the heart of the Group’s competitiveness and sustainability objectives.

The growing possibilities offered by the Internet of Things and Big Data now enable a product’s lifecycle to be monitored after commissioning. They create new perspectives of “hybrid” virtual modeling that make it possible to update Virtual Prototypes with data measured in service and in real-time and enhanced by artificial intelligence. This transformative approach, entitled “PPL” (Product Performance Lifecycle) and incorporating its disruptive “Hybrid Virtual Twin” solution, provides complete control over a product entire lifecycle and offers an essential answer to the key economic challenges of the industry of the future.

2016 was marked by the success of our historical solutions and the development of the newly acquired technological bricks that underpin the deployment of the innovative solutions of our PPL strategy. 2017 will be a year of integration and transformation, on the one hand to continue our investments and to amplify our virtual and hybrid prototyping solutions, and on the other hand to adapt our commercial and marketing resources to the new business momentum.

We remain confident in our capacity to amplify our own transformation, already widely committed to the industry of the future. This should put the Group in an ideal position to tap into the potential growth from the diversification and democratization of Virtual Prototyping and its extension toward the in-service performance, while continuing to improve our profitability”. 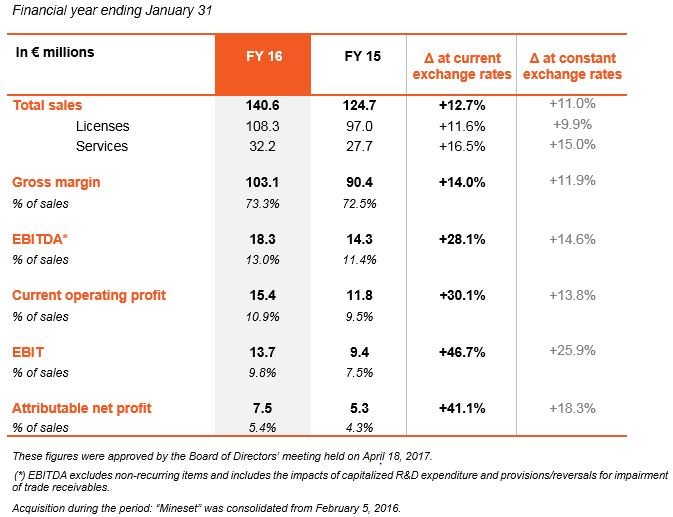 As announced on March 14, full-year sales totaled €140.6 million, up 12.7% year on year. Acquisition-related revenue amounted to €6.4 million, reflecting the successful implementation of initial commercial synergies. There was a positive forex impact over the year of €2.1 million, mainly reflecting the appreciation of the Japanese yen.

The product mix reflects the strong performance in Services, which contributed 23% of total sales, compared with 22% last year.

Sales generated by Licensing activity climbed 11.6% year on year to €108.3 million, driven by 13.0% growth in the installed base where repeat business (measured on a like-for-like basis and at constant exchange rates) remained at a very high rate of 89.1%.

Gross margin rose from 72.5% of sales in 2015 to 73.3% this year. This good performance is a result of the improvement of the margins in Services combined with maintaining the Licenses margins at a high level. This improvement was driven by the dynamic growth of the high value-added engineering studies delivered by ESI Group to industrial firms wishing to make the transition to smart factories.

Investment in R&D – the lifeblood of technological innovation – was maintained at a very high level and grew 12.3% in the year, to €32.7 million. This ongoing effort reflects ESI’s constant focus on the newly acquired technologies that underpin its disruptive PPL approach. These investments amounted to 30.2% of Licensing revenue. Once the Research Tax Credit and capitalized R&D expenditure are taken into account, total R&D costs recorded in the P&L amounted to €26.9 million, an increase of 18.3%.

EBIT surged by 46.7% to €13.7 million and EBIT margin grew by 2.3 percentage points to 9.8%. This impressive increase – bigger than the increases in EBITDA and current operating profit – was mainly attributable to lower non-recurring costs due to expenditure related to the Group’s most recent technological acquisitions recorded in non-recurring items in 2015.

ESI’s technologies acquisition policy, which has been stepped up over the past few years, has enabled the Group to develop a unique solution around a platform that hosts virtual multi-domain and multi-physicals models. This transformative approach makes it possible for industrial firms to use a single model to virtually manufacture and assemble product components at the prototype stage; capturing the physical information necessary to assure compliance with increasingly strict industrial and regulatory requirements.

ESI’s PPL approach represents an innovative step forward that aims to provide businesses with complete control over a product's entire lifecycle – looking beyond the virtual development and pre-certification phase covered by Virtual Prototyping to production and in-service use. This disruptive approach makes it possible to develop a “Hybrid Virtual Twin” that will anticipate a product’s operational performance – from product commissioning to its operational withdrawal – a crucial element in the transition to the industry of the future.

Leveraging this unique development strategy, in 2016 ESI renewed major three-year contracts in the Automotive sector and continued to diversify into other markets and to notably expand in the Aeronautical sector. ESI Group has also consolidated its position in the pre-project design and analysis phases in order to facilitate democratization of Immersive Virtual Engineering solutions. The recent acquisition of Scilab Enterprises, creator of the open source software Scilab that is recognized internationally by a community of over one million engineers and scientists, illustrates this strategy. Furthermore, this acquisition reinforces accessibility of ESI’s cloud-based offering and increases the potential for mass deployment of mathematical modeling to both business and individual scientific users on the lookout for efficient and lower cost solutions.

At this stage of its development, ESI Group intends to continue investing in innovative and disruptive solutions for the industry of the future and to strengthen its sales force to deploy the democratization of Virtual Prototyping and “Hybrid Virtual Twin”.