Alain de Rouvray, Chairman and Chief Executive Officer of ESI Group, comments: "Sales momentum in 2015, particularly in the Licensing activity, was confirmed in the fourth quarter, strengthening the positioning of ESI Group's Virtual Prototyping solution. The repeat business rate remained particularly high, and our international expansion continued successfully, especially in Asia; reflecting the strong value proposition of ESI's industrial solutions toward the emergence of the smart digital factory. The sustained progression of high-value-added engineering studies, designed to foster transformational industrial innovation, provides a powerful catalyst for the growth of ESI Group's business in the medium and long term. Furthermore, by its recent acquisitions the Group has amplified the democratization potential of its solutions. The investments initiated in 2015 to integrate these acquisitions will be pursued in 2016 to speed-up the building of the strong expected synergies." 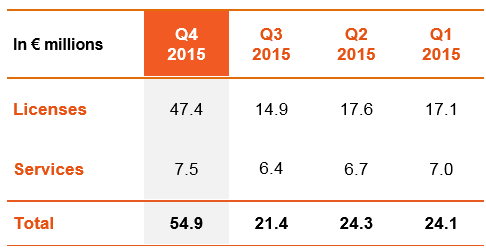 Sales for the fourth quarter amounted to €54.9 million, up 12.1% compared with the fourth quarter of 2014. There was a positive currency effect of €2.2 million. Licensing sales amounted to €47.4 million, up 14.7% in actual terms, driven by the strong performance of the Repeat Business (+15.7% in actual terms), particularly in Asia. New Business also grew strongly, rising 9.8% at actual rates, driven by the success of the Licensing activity in the Americas.

Regarding the Services activity, revenue amounted to €7.5 million, a slight down year-on-year
(-1.9%). The solid growth in engineering studies (+18.7%) is not apparent due to decline of non-recurring Other Services (e.g. hardware sales).

Sales totalled €124.7 million, up 12.3% year-on-year at actual rates. Acquisition-related revenue remained limited at €0.7 million, split equally between Licensing and Services. There was a positive currency effect of €6.1 million, arising mainly from positive movements of the US dollar and to a lesser extent the Japanese yen and South Korean won.

The product mix shifted towards Licenses activity, which now accounts for 77.8% of total sales compared with 76.1% in 2014.

Licenses activity recorded annual sales of €97.0 million, up 14.8% at actual rates compared with the previous year. That solid growth reflects ESI Group's success in developing its installed base, which generates the very high repeat business rate of 90% at constant exchange rates. New Business amounted to €16.5 million at constant exchange rates and excluding acquisitions, a small decrease of 2.8% compared with 2014 despite strong momentum in the second half, particularly in China.

The BRIC countries accounted for 12.6% of sales in 2015, similar to the 2014 figure. Strong growth in Licenses activity in China was partly offset by ongoing economic difficult context in Russia.

Booking rose sharply among major customers in the automotive sector, and in particular from high-profile strategic partners such as Volkswagen Group, Renault-Nissan and Honda. Thanks to its strongly disruptive Virtual Performance solution, ESI provides these customers with a unique multi-domain and multi-physics environment that enables them to virtually manufacture and assemble essential components using a single core model that captures the level of physical information needed to meet industrial and regulatory requirements.

ESI has notably strengthened its positions in the aerospace, energy and heavy industry sectors. Companies in those sectors, subject to heavy competitive pressure and environmental constraints, have benefited greatly from ESI's solutions. In particular, ESI's sharply rising activities with the EDF group attest to the unique value that ESI can add in nuclear safety and to the development of new energy options, an area in which a strategic partnership has been signed with EDF Energies Nouvelles last year.

Success of the virtual reality solution

In 2015, the dynamic growth of the virtual reality solutions continued with new contracts signed with leading manufacturers in the aerospace and transport sectors, such as US helicopter manufacturer Sikorsky Aircraft Corporation and Bombardier, a world-leading player in aircraft and train production. ESI's virtual reality solution has also being widely used by Boeing, which has installed it at its new sites. The solution enables Boeing to improve its decision-making through globally distributed teams working collaboratively on an immersive, real-time virtual model.

In 2015, acquisitions of technological bricks, particularly in the internet of things (IoT) and cloud technology, have supported ESI's strategy of broadening the use of virtual prototyping with the intent of increasing its adoption within the industrial ecosystem.

In 0D-1D systems, the acquisition of ITI – whose expertise is recognised by major global industrial companies like Ford Motor Company, Honda, Siemens and Total – significantly extends the applications of ESI Group's virtual engineering solution. The acquisition will enable the Group to exploit commercial, geographical and sector synergies, while expanding its position within the product manufacturing cycle.

The external growth strategy deployed in 2015 is now enabling the Group to offer a virtual engineering platform that encompasses the various stages of developing an industrial product within an immersive, interactive 3D-4D environment; from concept to prototype production and regulatory pre-certification.