Alain de Rouvray, Chairman and Chief Executive Officer of ESI Group, comments: “The dynamics in the adoption of ESI Group's Virtual Prototyping solutions by industrial leaders was fully confirmed in 2015. This trend was amplified by the rise of the smart digital factory that is revolutionizing the innovation process and shortening delays in product manufacturing. The buoyant development of high value-added innovative engineering studies confirms ESI’s global role as a major player in this transformation. Our acquisition policy, in essential technological domains, has allowed us to expand the Group’s strategic positioning in the full manufacturing and performance value chain of industrial products. In 2015, our profitability significantly increased despite the costs of acquisitions integration. Moreover our integral virtual prototyping offer is now considerably enriched thanks to multi-physics inputs such as systems modeling that animates 3D components, continuous connection to the real world through the Internet of Things (IoT), and integrated machine learning leading to autonomous driving. In the near term, combining sales growth and the deployment of these exciting and expected synergies from our newly-acquired solutions, we anticipate a further improvement in our economic performance while strengthening our strategic partnerships.” 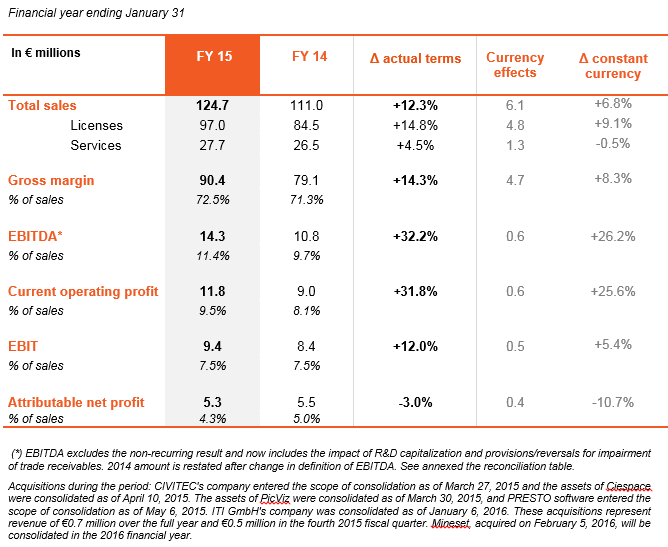 As announced on March 14, 2016, 2015 annual sales totaled €124.7 million, up +12.3% on the previous year at actual rates. Acquisition-related revenue remained limited at €0.7 million, split equally between Licensing and Services. There was a positive currency effect of €6.1 million, arising mainly from the positive trend of the US dollar and, to a lesser extent, the Japanese yen and South Korean won.

The product mix shifted towards Licensing activity, which now accounts for 77.8% of total sales compared with 76.1% in 2014.

Sales generated by Licensing activity strongly increased by +14.8% at actual rates compared with the previous year. That solid growth reflects ESI Group's success in developing its installed base, which generates the high repeat business rate of 90% at constant exchange rates. Services activity recorded a moderate growth of +4.5%, driven by a solid +14.8% increase in engineering studies, the core of ESI Group's Consulting activity (Services excluding Other Services, such as supply of equipment).

In 2015, the geographical split in sales reflected the dynamism of activity in Asia, while the proportion of activity recorded in BRIC countries remained stable.

Improvement in the gross margin

The gross margin was 72.5% of sales, compared with 71.3% in 2014. This improvement was a result of the shift in the product mix towards Licenses and also an improvement in margin in both Licensing and Consulting activities.

In 2015, Sales and Marketing (S&M) and General and Administrative (G&A) costs represented 31.0% and 13.8% of global sales respectively. Altogether, these costs increased by +11.2% in 2015, compared with a +12.3% increase in sales. This result, which fully includes S&M and G&A expenses of the Group’s acquisitions, highlights ESI’s good piloting of its operating costs over the year.

In alignment with our strategy based on technological innovation, R&D investments increased by +21.6% at actual rates. R&D costs thus totaled €29.1 million (excluding the French Research Tax Credit ‘CIR’) and now represent 30.0% of Licensing sales. This increased investment concerns existing technologies and also technologies associated with recent external growth operations. Once CIR and R&D capitalization costs are taken into account, the total R&D costs recorded in the P&L statement amounted to €22.8 million at actual rates, an increase of +14.0%.

The EBITDA increased sharply (+32.2%) to €14.3 million, giving an EBITDA margin of 11.4% in 2015 compared with 9.7% in 2014. The annexed reconciliation table documents the effect of the standardization in the definition of EBITDA and confirms the Group’s good performance in terms of increase in profitability both prior to and after the integration of its acquisitions.

Current Operating Profit strongly grew by +31.8% to €11.8 million, showing a current operating margin of 9.5%, or 1.4 percentage point on the previous year.

EBIT increased by +12.0 % to €9.4 million, giving a margin of 7.5%, stable on the previous year. This increase was smaller than the increase in EBITDA and current operating profit mainly because of exceptional costs, classified in non-recurring costs, associated with the last six technological acquisitions carried out in 2015.

The Financial Result was -€0.9 million versus +€0.7 million in 2014. In 2015, financial costs, notably associated with interest charges, were not totally offset by revenue from currency gains and losses, which in 2014 exceptionally totaled €1.6 million following the strengthening of the US dollar at the end of the year.

The deployment of ESI Group’s solutions among global industrial leaders and their subcontractors has been characterized by the amplification of the Company’s successes, notably among major automotive manufacturers and in particular among our traditional and emblematic strategic partners such as Volkswagen Group, Renault-Nissan and Honda. Our sectorial diversification strategy has also continued, and has been intensified in the aerospace, energy and heavy industry sectors. Regarding the product offer, the virtual reality solution has performed particularly well through the strengthening of existing collaborations or through new cooperations with industrial leaders in the aerospace and transportation sectors, including Boeing, Bombardier and Sikorsky Aircraft Corporation.

Realization of the strategic vision

The expansion of the Group’s strategic positioning, notably thanks to the newly acquired technological building blocks, has further enhanced our growth potential. In particular, the acquisition of ITI GmbH in January 2016 has given the Group a recognized presence in the simulation of 0D-1D systems. The latter’s expertise, which is acknowledged by major global companies, allows direct access to an industrial product functional features and to represent its interactions with its 3D components. Most importantly, the use of the information technologies of the future (ICT) that address Big Data, Machine Learning and the Internet of Things (IoT) now allow to present and experience ESI’s solutions in an interactive space and to enable real-time decision-making in a virtual immersive environment. The innovative virtual prototype can now become agile and smart to support industrial manufacturers in their transformation towards the era of factories of the future and of autonomous digital products.

Reconciliation table following the standardization in the definition of EBITDA 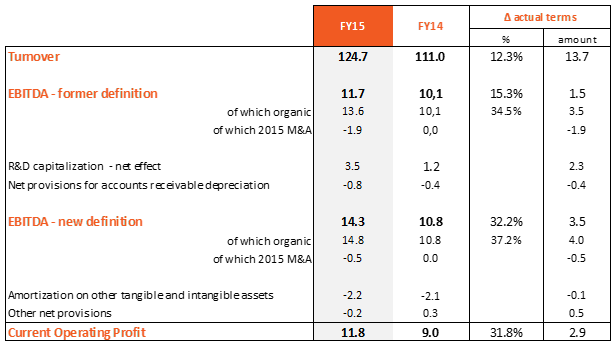