Alain de Rouvray, ESI Group’s Chairman and CEO, comments: "The significant improvement in our economic results over this fiscal year reflects the success of our profitability improvement and cost control policies, both to be continued over 2015. Our management team reinforcement and recent developments and acquisition advances have increased ESI solid assets to strengthen strategic relationships with OEMs and their Tier 1 suppliers and partners, and to amplify the use of our virtual prototyping solutions in their eco-system. The increasing use of our solutions by all stakeholders collaborating on the digital model via proprietary Cloud computing technologies, and our presence in new areas such as embedded systems and the life sciences, will strengthen and expand ESI market positioning.  ESI Group is fully aware of how crucial sustaining competitive innovation is to keeping our leadership position in helping our industrial clients work towards e.g. smart digital factories. This explains why we plan to maintain our investment momentum as well as our targeted acquisition strategy in 2015, while pursuing growth and increasing economic performance." 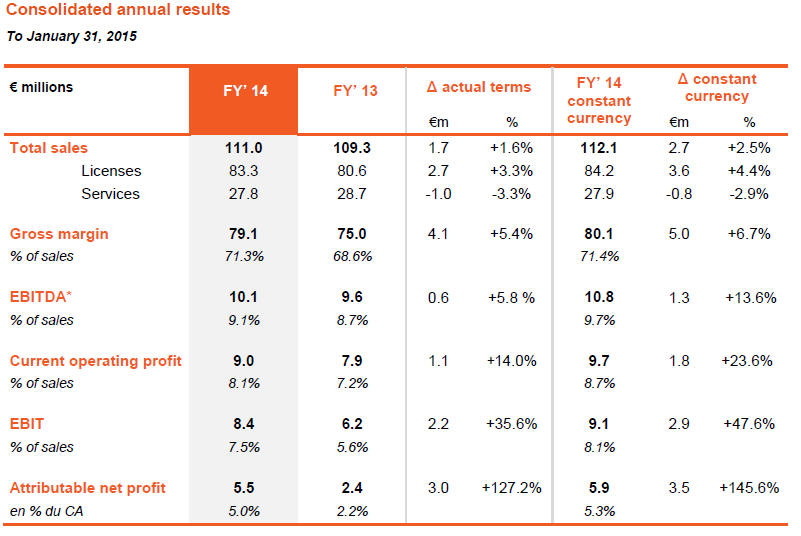 The financial statements were approved by the Board of Directors on April 14, 2014. The audit procedures were performed on the consolidated financial statements and the certification report is being issued.
* Excluding acquisition costs, amortization of goodwill and before the impacts of R&D's adopting IFRS.

As announced on March 12, 2015, annual sales for 2014 came to €111.0 million, up slightly by 1.6% on the previous year in actual terms. There was a negative currency effect of €1.0 million over the period, mainly due to the fall in value of the Japanese Yen. Sales would have been €112.1 million, up 2.5% at constant currency. Adoption of ESI Group's solutions by industry leaders and their subcontractors reflects the success of the immersive virtual reality offering and builds on the evident value proposition of Virtual Prototyping  to address societal priorities such as air quality and renewable energies. This solid business dynamics, less evident in the first three quarters, was apparent again with the performance of the 4th quarter, during which sales grew by 7.8% in actual terms, confirming the more pronounced seasonal nature of the business in 2014.

Licensing activity was solid, representing 75.0% of 2014 sales, compared with 73.3% in 2013. It grew 3.3% over the period, buoyed by 4.8% growth in the installed base and a repeat business rate which remained at the high level of 84.7%. New Business accounted for 20.1% of Licensing sales. The growth of Licensing and New Business was affected by the difficult political and economic context in the BRIC countries, notably Russia and China.

The Services activity amounted to €27.8 million (down 3.3% in actual terms) following the former strategic decision to focus on projects with higher added value. After a reduction in activity in the first nine months of the year there was a significant 10.7% rise observed in the 4th quarter.

The Gross Margin was 71.3% of sales compared with 68.6% in 2013. This improvement is due to the favorable development of the product mix. The licensing margin was sustained at a high level and there was significant improvement in the Services margin consequent to the strategic refocusing of the business.

The ESI Group retained an active investment policy; manifest by 12.4% growth in its R&D expenses in actual terms. These expenses amounted to €23.9 million (excluding the French research tax credit), and represent 28.8% of Licensing sales; a slight increase compared to 2013, when they were at 26.2%. These investment expenses include development activity by the recent external growth operations, such as virtual reality (IC.IDO), fluid dynamics (OpenCFD) and systems (CyDesign technology). The total R&D expenses recorded in the income statement in IFRS format are €20.0 million in actual terms, up 16.9% on the previous year.

Sales & Marketing and G&A costs remained largely stable (€35.0 million and €15.2 million respectively) thanks to the Group's efforts to control costs.

The increasing difference in growth between the EBITDA and the ROC on the one hand and the EBIT on the other hand is mainly due to the exceptional items recorded in 2013; including provisions for risks and acquisition costs.

Net Financial Income was €0.7 million vs. a loss of €0.9 million in 2013. This €1.7 million change is due mainly to the impact of the exchange rates evolution, particularly of the US dollar right at the end of the year.

The quality of the business indicators in the first months of 2015, combined with recent strategic advances in marketing and recent acquisitions, places ESI Group in an ideal position to increase its business volume and achieve profitable growth this new fiscal year.

The reinforcement of the management team with the arrival of Peter Schmitt, PhD., as Executive Vice President of Sales & Marketing, and the promotion of Mike Salari, as Executive Vice President of Engineering Services, is expected to enhance our ability to deploy global strategies and implement actions with major industrial actors, including new clients.

The business dynamic will also be supported by the accelerated growth of ESI Group in markets of the future, such as advanced driver assistance systems (ADAS) vehicle safety and the visualization of scientific Big Data. This diversification, into areas with strong potential such as active security, cyber-security, machine learning and life sciences, derive in part from the acquisition of CIVITEC and the purchase of the assets of Picviz Labs., both owners of leading edge technology solutions. These technologies also have an established commercial base which broadens diversification across industry sectors. Finally, they play a role in reinforcing the innovative potential of ESI Group's digital modeling and Virtual Prototyping solution. The Group expects to draw on its solid experience in acquisitions to successfully integrate these acquired top class companies.